Long before Dadra and Nagar Haveli became the industrial hub that it now is, long before it was a Portuguese Colony, the region was exclusively the homeland of indigenous tribes. Indeed no other region in India has got such a vast group of tribes that owe allegiance to it. Warlis, Dhodias, Dublas and Naikas – all these tribes call Dadra and Nagar Haveli their homeland. Additionally you will also find Kathodis, Koknas, and even Kolis and Agris settled here.

Indigenous people still make up for about 63% of the state’s population. Of these Warlis make up more than three fifths of the tribal population of this union territory. Indigenous tribes have their own beliefs distinct from any major religion and though they borrow influences from the people they interact with, their mythology, culture, and practices remain unique and form the heritage that is handed from one generation to another.

Major Tribal Culture and Heritage of Dadra and Nagar Haveli 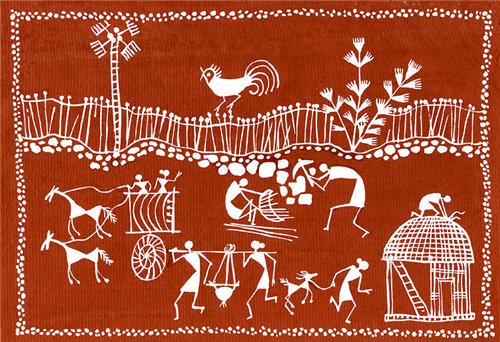 Warli Heritage Warli mythology tells us that at the beginning of the world there were two primordial beings, the Kahankar (the narrator) and the Ahankar (the assimilator). One started speaking and the other started listening. They remained in that same position for many years and long after they had dies, people found two heaps of bones in their place.

They put these bones into a large vessel of water. The bones that floated were of the Kahankar for he had given away all knowledge. The bones that sank to the ground were that of the Ahankar for he had accumulated everything. These are the two entities or two realities of life and one must always give away what one has taken so that one can stay afloat and flow with time rather than sinking into the ground and staying unwavering.

Warlis have a unique painting style that depicts the world through unique symbolism. Indeed every Warli painting is a depiction of the universe as a microcosm watched through the eyes of God.  Warli painting has many motifs and depicts everyday life as a celebration of creation. One of the favorite scenes is a depiction of the Warli dance where men and women put their arms around each other and form one human spiral that dances as a continuum to the tune played by the unique pipe called the Ghangal – a musical instrument that is made by fusing a long hollow gourd to a hollow bamboo. For rhythm, there are anklets or ghungroos worn by both the men and the women. The Tribal Museum at Silvassa has a detailed section on the Warli lifestyle and their art and traditions.

The Dhodia tribe is not nomadic as other tribes and that is its main identity for Dhodia literally means owner of a Dhondi or hut. Therefore a Dhodia is a house dweller as opposed to jungle dwellers or boatmen. Indeed it is said that they are related to the Bhil tribe and at some point in history the two groups segregated with the Dhodias settling down to an agrarian lifestyle as opposed to the Bhils who remained hunters and jungle dwellers.

Relations with Bhils have been maintained but are at best courteous as the Dhodias consider themselves to be higher in the social ladder than the Bhils. Agriculture is their main profession and they are known to be good tillers of land. They are known to display their prosperity and both the men and the women wear various silver necklaces, waistbands, anklets and bracelets. The men wear a short dhoti while the women wear a saree pulled over to knee length.

The Dhodias have their own customs and traditions that were distinct from Hindu customs. They used to practice polygamy and also had a tradition of buying wives. These customs have slowly been removed from the community. They speak their own Language – the Dhodia language.

Racially they are shorter in height than other tribal communities of the area. They follow Hinduism and have a Bhagat or a God man who officiates and conducts all their ceremonies and also drives diseases away. They are fond of beads and necklaces and ornaments and also have their own dance called Tur or Tarpa which is a form of thali dancing.

The Koknas probably derive their name from Konkan, which is the region where they originated. The men are taller and more able bodied than the men of the other tribes. The women are also taller and well built.

They are also agrarians who are mainly engaged in paddy cultivation. They also follow Hindu customs and traditions but have their own names for these festivals. For example Diwali is called Barash. They also have a harvesting festival that is celebrated in September.

Unlike other tribes, these tribal people usually adorn themselves with tattoos as much as they decorate themselves with jewellery. They typically tattoo their foreheads. They perform a unique dance called Bohada in which they wear masks that are carved out of a single piece of wood. Masks are created for many mythological deities.

The Kathodis derive their name from the kaath or Catechu plant whose extract is used for preserving nets and sails of the fishing community. The Kaath extract is also used as a dye and an astringent. In Maharashtra this tribe is known as the Kathkaris. They still remain a very backward community usually living in the forests. 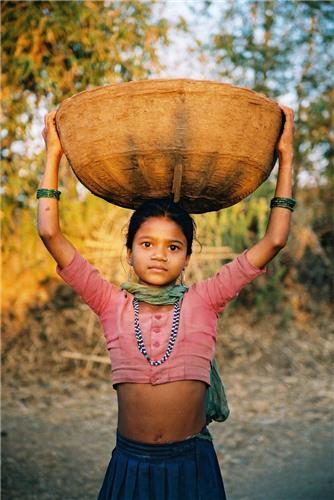 The Kolis are fisher folk that live on the northern coastline of Maharashtra. Many of them have been living in Nagar Haveli for centuries. The men have a distinctive headdress and use a simple large cloth to cover their waist down to their thighs. The women usually war nine yard sarees. The koli dance is very vibrant and distinctive. They largely follow Hinduism though Christianity is also prevalent within the community. They mainly speak a dialect of Marathi.

Tribal communities have largely preserved their culture in Dadra and Nagar Haveli and it is not uncommon to tour the countryside and the villages of this region and find a colorful array of costumes and ceremonies and music each having its own community flavor.

Though you may want to visit the Tribal museum in Silvassa, to gain more information – it is the sheer joy of traveling through this region that will give you a firsthand experience of the uniqueness of tribal life and the rich and varied customs and traditions that form the basis of their society. They also lend a separate identity to the union territory that is distinct from the two large states (Maharashtra and Gujarat) that surround it.